Warren Mitchell Davis is the son of James Leslie Davis and Linda Mitchell Davis.  Les Davis was born and raised in Philadelphia, PA.  Les Davis is the son of Warren B. Davis and Ada Springer Davis.  Warren B. Davis was a pioneer in plastic surgery and was a leader in perfecting the procedure to repair the cleft pallet.  Ada Springer Davis was the daughter of Frank Springer, the lawyer for the Maxwell Land Grand and the founder of the CS Cattle Co (along with his partner and brother, Charles Springer).  The Springer brothers started the ranch in 1873, having come west from Iowa.  Les entered Dartmouth College with full intentions of becoming a physician.  In 1941 he decided he would rather travel west to learn the cattle business from his Uncle Ed Springer, the manager of the CS Cattle Co.  Les became the manager of the CS in 1946, after his return from military service in World War II.  During Les’ early years at the ranch, his Uncle Ed Springer took him to the Tequesquite Ranch to meet his good friend, Albert Mitchell.  During this visit, he met Albert’s young daughter, Linda.  In 1953 Les and Linda married.

Linda Mitchell Davis was born in Denver, Co. but grew up on the Tequesquite Ranch in Mosquero, NM.  She learned the ranching business from her father.  Linda’s mother, Julia Sundt Mitchell, had died when Linda was but 4 years old.  Albert Mitchell not only managed his own Tequesquite Ranch, but also the historic Bell Ranch.  Albert Mitchell is also the only person to be a 4 time President of the American Quarter Horse Association.  So Warren’s mother has a rich heritage in ranching.  When she and Les married, Linda became one of the greatest assets to the CS Cattle Co.  Her knowledge of the cattle industry is well known.

Warren has great memories of riding horses behind cattle all of his life.He feels blessed to have been able to spend most of his time in the great outdoors.Ranch life is not always easy, but he remembers taking the cattle on the long cattle drives up into the mountain country.The day began long before the sun was visible, and the drive was often dusty.Once the cattle were at the foot of the mountains they rested in the trap, until later in the afternoon when the gate would be opened into the drift pasture.The older cows would be ready to start up, but the younger cows would have to be pushed up the next morning.Warren and some of his siblings, along with Jiggs Porter and other cowboys, would spend the night in the camp. The crew would play cards and sleep in cowboy bedrolls.After the cows and calves were up into the mountain country, the Davis crew would later make a trip into the Martinez camp high in the mountains to brand the remnant calves.Later in the fall, the cows and calves would have to make the drive back to the CS Headquarters.

Warren recalls that branding has always been his favorite time during the seasonal work on the ranch.  He loves to rope and drag calves, and when he was a youngster, flanking calves with his friends and family made great memories.  Warren loves the camaraderie of cowboying with a good crew.  The Davis kids all showed in 4-H.  They showed steers they had raised on the ranch.  He feels that tending to the steers at such an early age gave them all a sense of responsibility.

Warren attended school in Cimarron from kindergarten until the 11th grade when he was enrolled in the New Mexico Military Institute of Roswell, NM.  He remembers leaving home as being one of the hardest things he ever had to do, but feels the education and discipline he learned at NMMI is invaluable.  After his high school graduation in 1972, Warren attended New Mexico State University earning a degree in Animal Science and graduating in 1977.  Warren missed a semester when his father, Les, had suffered a heart attack.

In 1979 Warren met his future wife, Mary Ola Bailey of Waynesboro, Georgia.  Mary’s parents, J. W. and Betty Bailey raised horses on their family ranch, Windy Hill Ranch.  They were the oldest breeders of Quarter Horses in the state of Georgia.  The Bailey’s made trips to Raton and Cimarron, New Mexico to buy horses.  On one of those trips, Warren met Mary, and they were married a year later on November 29, 1980.  Mary says it was love at first sight for her, but Warren says it took him a little longer.  Mary joined Warren in working on the ranch.  She has been involved in all aspects of the ranch, especially managing the horse breeding along with breaking and training.  On March 12, 1984, Warren and Mary had their first child, a son, Walter Leslie Davis.  Sara Elizabeth Davis was born on October 24, 1985.  Walter and Sara were homeschooled until high school.  This enabled them to be involved with everyday ranch life.  Both of the kids made top hands.

Walter married Amy Elizabeth Walton of Raton, NM, on July 30, 2011.  Amy was enlisted in the U.S. Army serving as an army nurse.  She and Walt lived in Tacoma, Washington for about 4 and a half years.  Once Amy’s service was completed they returned to the CS.  They have two children, Jack and Grace, now 4 and 2.   Walt and Amy with the kids live at the headquarters for the Crow Creek division of the CS.  Now there is the sixth generation on the ranch.  Walt enjoys taking Amy and the kids out to feed cows in the winter and spring.    Sara married Jimmy Sorrell of Amarillo, TX on May 12, 2018.  Sara teaches math at the Maxwell School, Maxwell, NM.  She also helps with the ranch work.  Jimmy helps on the ranch as well as breaks colts, and trains horses for the public.

Warren has done his best to instill in his children a love for the family ranch.  He feels the responsibility to pass this ranch safely into the hands of the next generation.  The drought that began in the early 2000’s has been a great challenge.  One of the hardest times he remembers was when he had to send the cows he managed at the Crow Creek division to Colorado and Wyoming.  Because of the stress on the pastures and the lack of water, he was faced with sending them away or selling them.  Mary believes that Warren’s courage in making this choice may well have preserved the CS Cattle Co.  The CS did not have to lose a single employee, even though the ranch was paying someone else to care for its cattle.  Warren was able to bring those cows home in a year.  Had he sold them, he would have been selling them at a cheaper price and buying cows back at a higher price.

Warren says that he hopes that he honors those who have gone before him in making this ranch successful.  He believes that the future of our way of life is tough and you have to love it.  It isn’t a 9 to 5 job with the convenience of a town close by.  He feels that the stewardship of the land and the preservation of ranch life is of utmost importance.  Life and death are realities in the life he lives.  Life is so precious.  The joy of seeing a newborn calf being licked clean by its momma is hard to describe.  People who live in town just don’t get to see that.  Warren has told his kids that the ranch life cycle is like a big merry go round.  Each year you do the same things, calving in March and April, branding in May.  Weaning and shipping happen in October and November. The year changes and it all begins again.  The same things are going on now as they were over the past 145 years.  There have been some changes for sure, but for the most part it’s the same, only a different group doing it.  “Once you’ve had your ride on the go around and get off, others will take your place and keep the ranch going.”

The CS Cattle Co horses are used almost daily throughout the year.  The ranch is a breeder of Quarter Horses for over 60 consecutive years.  Our broodmare band has ranged from 35 mares in the 1980’s, down to 25 mares in the 1990’s, and as low as 5 mares during the worst drought years of the 2000’s.  This year in 2018 we bred 10 mares.  The ranch could not function as it does today without the use of our horses.  The CS believes that good ranch horses must be sound with good feet and legs, and deep in the heart girth, topped off with a prominent wither.  A good ranch horse is cowy, athletic, quick footed, and dependable.  We have made it a priority to have intelligent, kind horses that are also good looking.  We brand calves the old fashioned way.  They are drug to the fire.   During the fall work we sort the pairs horseback.  During weaning we use the horses to doctor and load sick cattle. 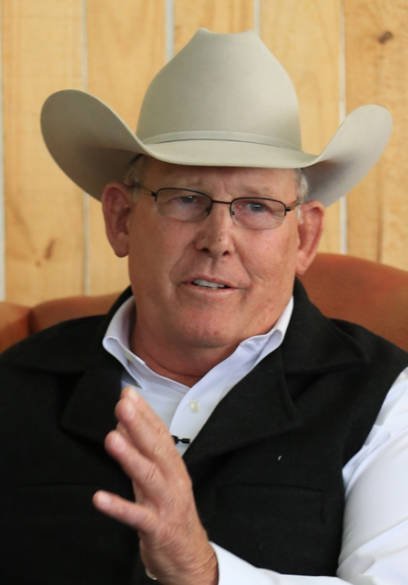